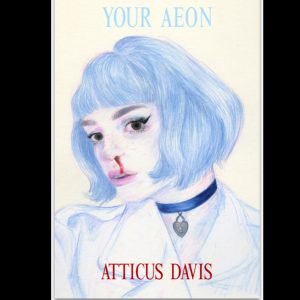 “MORE LIKE A CAR CRASH THAN A POETRY BOOK.” – Aiden Burke

The building blocks of this work are from the stones that melted before evolution
from the primordial semens of earth.
Without the word we would still get on.
I use the tools I’ve been given.
***
This book is a reading experience unlike any other. Some lines have the love and life the American
(where)
the belligerence is social. Violence is an eternal natural state, an undercurrent, neither love/nor hate.
From which compounds all the beginnings of life.
***
Other lines are bloodless, brutal, and conceptual.
Atticus begins sculpting an entire new world through perception with his, like a toddler learning to shoot a gun, grasping at ideas larger than his life\mind.
Its execution is more electric and experience based than most poetry. His ‘Hard-concept’ works like ‘FF Compositions,’
or ‘Clay’ works like ‘Purgatory,’ all deal with abuse/abusive logic/abuse of logic, manipulation, evil in the open, and the good hidden in everyone. The truth hidden in a lie. Every lie that comes with chosen truths.
Influenced heavily by metal, post-hardcore, composition is vital. There has to be a constant chaos.
***
Feelings of nausea, alarm, horror, desire, are all combined.
***
Paranoia leaks spitting foam from the pages.
Some of these narrative poems are exhausting or exhausted.
A section of aphorisms called ‘Tailor Made Pain,’ presents concepts that may or may not be true.
May or may not be moral. And may or may not be sheer failures as truths or lies.
***
Keep your head out of it. Think for yourself. ‘Trust you like a friend/treat you like a stranger.’
While others are like his fiction, Ansel Adam’s inspired, ‘head on.’ What he calls, ‘American Floral.’
The nature of man is different in the modern world. Is it fatigue through a godless will?
The ancient is kitschy. No altar for most of us to subscribe to.
***
There is a certain necessity that comes with indecision: one must have a relationship with that which he believes. He must ease in slowly. The difference between the drop down menu of beliefs versus ones tailored truest to your experience. And then decide. Belief before experience but be bright enough to gauge it.
***
‘The cities are swallowing the villages…like you forgot to paint blood on the door…’
YOUR AEON IS COMING
Atticus Davis is a 25 year old poet and artist living in California. He is a modern day seer.
He is the author of the collection ‘Dumb Stuttering Free’ from Bedouin Books and his work has appeared in Metazen, The Scrambler, Housefire, Hobart, Vivimus, Pretty Owl, Whole Beast Rag, theNewerYork!, and Keep This Bag Away From Children.
Your Aeon.PDF
(U.S. only, email for international orders)
[wp_cart_button name=”youraeon” price=”10.00″]