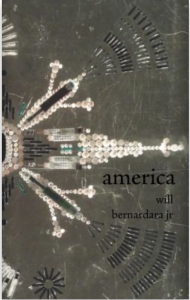 America, by Will Bernardara Jr. is an abrasive read. I will not investigate this statement any further, as that abrasion is clearly an intentional move on Will’s part and there isn’t much to make of it on its own. Following Will’s allusions to various Deleuzean Philosophers whose names I will refrain from mentioning, I think an interesting enough discussion can be had by simply comparing Will’s novella to the work of one of Deleuze’s most often-invoked American sense poets, Walt Whitman, and discussing American Pragmatism in general.

America is easily framed within the context of Whitman’s Leaves of Grass, which I think Will purposely invokes in order to show what he believes to be the terminus of that type of viewpoint: of the American Transcendentalist viewpoint of Whitman and Emerson, or the American Pragmatist viewpoint of John Dewey and William James. These men were largely radical empiricists (this likely lead to Deleuze’s fondness of figures like Whitman), but their philosophy maintains a fairly obvious blind spot, a sort of pseudo mysticism when it comes to their unbounded affirmation of Democracy.
Will opens with a short poem, titled “The Irrational Anthem,” which appears as a sort of decayed and perverted version of “O Say Can You See,” and it is here that he lays his immediate targets: the Pharmaceuticals and the Mental Health Industry, as being manipulated by perverse incentives under Capitalism. However, what at first comes across as simple Foucaultian hand-wringing gives way to show more creative (and I’d argue, enjoyable) underpinnings: a mythologization of these forces. This is a heavily covered subject in theory-fiction, so I won’t go into too much detail, and instead use a simple quote from Carl Jung for what I think Will is driving at:
“His gods and demons have not disappeared at all; they have merely got new names.” – Man and His Symbols
In this instance, Jung is simply speaking to a historical coherency in the human experience: in how the phenomena that were viewed as being due to religious or mystical forces in the past, that we might view as being due to chemical or biological processes, are identical. Both viewpoints are compatible for the collective unconscious. In the world of Will’s America, however, this statement is to be taken literally.
Will characterizes these forces by giving the demons their older tokenings: Mammon, Pazuzu, Abezethibou, etc. and their success within the novella itself is inverse to the credibility they have within its world, to the lack of belief the population has in their existence.
This simple plot device allows Will to write, with compelling immediacy, the violence enacted upon his world. There are passages that at times evoke Cormac McCarthy, but they are quickly folded into his fantasist-noir style.

“Cactus shadows fall and some are shaped like the Killakee Cat. The orb above the cactuses is hellfire. Truth is a naked, fruitless tree, ravaged by night and scorched by day.” (p.25)

Let’s compare the opening lines of Walt Whitman’s Leaves of Grass to the end of Will’s opening anthem.

“I celebrate myself, and sing myself,
And what I assume you shall assume,
For Every Atom belonging to me as good as belongs to you”

“O’er the land of the pharmacologically stabilized, and the drone of the slave”

Whitman’s poem invokes multiple discourses in a reciprocal manner, without the materialist scientific terms like atom getting in the way of the poetic register: as if there is a membrane between the political, the cultural, and the scientific that allows a gentle diffusion between the three. It maintains coherency; he may still celebrate himself because that is a primary value of the American country, to do so is to praise all Americans as our ability to be individuals is a primary trait of our cultural identity.

Contrast to Will’s, in which that membrane has been dissolved entirely. The reciprocal relationship between discourses is almost impossible when using the harder scientific jargon, which within the plot, is weaponized by demonic forces after America has itself. Through this simple stylistic choice Will invokes deep doubts about the endgame of Whitman’s transcendentalism: If the genre existed for this book, it would be the opposite.

In Will’s novella, and in the real world, the vitalism and scientific positivism embraced by Whitman has had its discoveries taken advantage of prior to comprehension, by a corporate personhood which, collectively cognizant of its immediate desires and most adaptable to them, is also subject to the same tendencies toward greed as any one of us as individuals, and considers us the same way we consider animals like mice, or ants: a pest to be ignored, beaten back if too rowdy, and inconsequential if stepped on. Again, Will manifests this by personifying these tendencies with actual demonic entities.

Amphetamines and their variants among synthetic designer drugs, such as MDMA and the 2C family, in particular, are what makes the user or patient ripe for manipulation by these demonic forces. There are echoes of CS Lewis’s Screwtape Letters in this, and the actions of the plot are driven consistently by this motif. In that novel, a demon is attempting to corrupt a human but is unable to make any headway with any direct action. Instead, it must allow the man’s own vanity to conquer itself. This can be seen in the actions of Adam Reid’s father, who abandons his family by simply breaking it beyond repair, by making the action he wants to take the only action possible. The suburban ennui of Adam Reid and his peers and their crass, meaningless dialogue is written with an almost bitter sense of accuracy. Any desire to use the drugs they do for experimentation, for discovery is absent from their lives. Their activities could be considered ironic, but irony at least requires a backdrop of sincerity to act as a foil. It is simply joyless.

Whitman’s Leaves of Grass is considered a sort of forever poetic text for America’s emergence onto the global stage. Whitman’s has an unabashed positivism, both in how he invokes the language of the empiricist scientific framework and in his optimism towards America as a bustling, city building nation. These are the sounds a nation makes when it has not yet, but might soon, enter into its prime. Will’s novella shows the bitter, violent, and joyless conclusion of this telos.