“Clearly there is a line and we have crossed it, but let’s keep going and see what happens anyways” was the stupid mantra we kept among our inner circle. The parties we had led us all to a state of mind that was intensely self destructive, we craved the danger and the terror that could ensue. We were all in bliss and my paranoia began to take a backseat. That was until I created a void in my life of the time I overdosed.

I was always a willing member not wanting to seem out of place or be left behind on this destructive spiritual journey that we had embarked on. I saw fit to always try and out do and overcompensate for my fears, it was how I managed to never succumb to them. Can’t lose if you destroy your ability to hold a thought in your mind.

As time went on we got more intense about how we took it all, from the music to the drugs to the relationships, everything began to swell. We began to supply everything ourselves to gain even more control. It was one big stranglehold on each other, a wind pipe crushing grip that left everyone stuck on the same doomed trajectory.

The endless pressure I felt and in return exuded on others to go out night after night, we could always see who was most hungry to get lost from themselves once again. We tried to play it cool but a person’s eyes will always reveal the hunger, the itch. Some of us lost jobs, places to stay, but the group always cared for its own. The dependence grew on each other and the need to consume the night. Paranoia was nowhere to be seen. 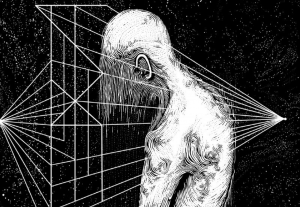 Really in the thick of it

It began as many others had before it, drinking on the train on the way to a college house or neo-crack den. We were armed to teeth and ready again to go once more into that breach. I can honestly never tell if it was fervor or anxiety, maybe both concurrently and we couldn’t bisect them due to the mental molasses we brewed for ourselves.

Deals began to be made, swapping what supplies we had so everyone had the favored vehicle of carnage and off we went. The DJ in the club was an outsider but a further deal made had us on the bill for the night so we could draft as many of the stranglers as we could into our ethos. At this point I moved to vodka, red bull, and molly. It was a start but one of us was well on his way to being beyond all his senses. We had cocaine to help refocus us on the mission at hand so everything now began to flow with a renewed and unseen vigor.

It was 3am now and we were in the thick of it, acid tabs were being eaten by the sheet, but the club was closing so we had to set off to the main event. A warehouse about a mile or two outside the city. We had movers, recruiters, and providers all working towards the common goal of a more grandiose night. This was when the 2CB was loaded into our systems. Warnings had been disseminated through the group to only take one at a time. So strict was this rule that it was made sure we each only ever had one, except for me by a drunken mistake.

It was my time to shine, to breakthrough and see what I could glean from a state I had never reached. The party was in full swing and it was a sight to behold. I didn’t even think twice, I ingested my carnage and began the ever ecstatic wait for a usually delayed come up. It never came. What came was a massive disconnect in my brain and body as two realities began to collide in my mind. One of these was of what I believed to be current time and space in the warehouse and the other, the now real present of a hospital bed. I’ve been blackout drunk but this was on a different scale. A whole entire part of my life was devoured with not a single fucking trace left for me to hold onto.

Friends’ faces change from ecstasy to pure horror as they look on at my body. A new figure pierces my vision and began to explain to me what was going on. Cardiac arrest was the first word I clung to. He had another attempt at communicating with me and I listened as intently as my drug addled brain would let me. I was brought in foaming and screaming by panicked friends who also could have probably used medical treatment. I had been sedated to stop my heart from shutting down.

It all crashed down on top of me. Everything. The terror, the addiction, the mindset, it all fell apart. I couldn’t reason a single scrap of it. In its place now stood the void blaring over me like an eclipse and in its penumbra was the sweet sensation of paranoia to comfort me.