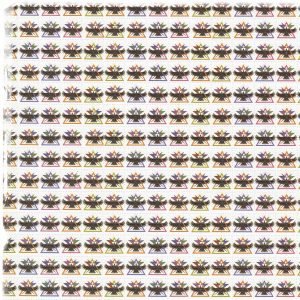 “Take this.” Jacquelyn tore a couple of tiny squares from the perforated strip and passed them to me.

I tried hard not to stare at her nipples, peering up at me from underneath her thin white shirt.

“Not at all. The acid will help you see.” She put two squares in her mouth and stuck out her tongue, showing me the pyramids emblazoned on the paper strips.

I hesitated, standing next to Jacquelyn in that clearing in the woods, remembering everything that happened over the past week.

Last Sunday, I ran away from home after a weird thing happened with Dad.

“Hey, son. Would you come over here for a second? I’d like to have a word before dinner.”

When I turned around, the guy standing where Dad had been had a Windows desktop instead of a face. The Start button was just under his right earlobe. Where his nose should have been there was a fucking error dialogue: “Error 3248-133-A432. OK! Cancel.”

I flung open the front door and I ran.

Jacquelyn’s fingers grazed my arm, gently pulling me out of my daydream. I smiled. I liked how she touched me all the time.

“Listen, a big part of what your brain does is filter out raw sensory data. It sorts all the stuff you perceive through your senses and orders it to make sense of the world around you. For our purposes, the trouble is that evolution programmed your brain to filter out pretty much everything that wouldn’t be useful to a caveman trying to outrun a lion. What if there’s new sensory data you want to let in but that your brain is keeping out? We don’t have the technology to change the filter. The only thing we can do is try to disrupt it.

“LSD disrupts your normal brain function. That disruption is the fun part and the holy part and the part that helps us do what we do. You can perceive things that might otherwise be filtered like, hopefully, my thoughts. With practice it gets easier and easier.”

I shot her a skeptical look. This was the kind of pseudo-science her acid-priest, loser boyfriend Julian spewed. I bet they don’t even fuck, that dude is so fried. I can’t believe they’re together. I wonder if he’s got a big dick.

I put the stamps on my tongue.

“Cool. Now sit down.” She came up behind me and tied a blindfold over my eyes, placed a cold revolver in my lap. I knew the plan, she’d been talking about it for a couple days now, but I’d never held a gun before and the cold metal was jarring.

“Just relax for now. It’ll be about an hour before we can start. I’ll set up the targets.”

As I ran through the street from the man with the computer screen face, a group of dingy kids in a dingy van pulled along next to me and waved for me to get in. I grabbed an outstretched hand that pulled me inside. The tires screeched as I caught a last glimpse of my parent’s house in the rear window.

The van pulled up to their camp, a collection of dingy old farm buildings teeming with little kids. That’s where I met Jacquelyn. Just before Julian’s nightly drug sermon she volunteered to teach me how to receive.

“A new era of broadcast has begun, electromagnetic frequencies designed to interact with brain waves, designed to unlock a networking capability between all human consciousnesses. But it doesn’t work. Not for most. Those of us here, those of us who are not so old that our minds are inextricably fixed in the old ways of perception, those of us capable of receiving the collective awareness, God—we are the future of our species!”

“Are you feeling it yet? I set up some cans for you to shoot. I know you can’t see them. But I can. Try to see them through my eyes. Go ahead. Shoot.”

I squinted under the blindfold and I let off a couple rounds haphazardly. I didn’t hit anything.

I felt Jacquelyn breathe into my ear, “Slow down. Try to hear them, to smell them.”

I listened but all I could hear was the sound of Jacquelyn rearranging the targets and the wind in my ears. I could only smell the musty blindfold. I was beginning to see patterns swirling on the insides of my eyelids, but I still had no idea where to shoot.

“Shh.” She assured me. “Don’t break your concentration.”

Suddenly, like a warm wave reverberating up my neck, awareness came over me. Now I knew exactly where the cans were. I could see them. No. Not only could I see them, hadn’t I set up the targets myself? Now, I saw myself standing awkwardly, blindfolded, stupidly pointing an old pistol toward the trees.

I dropped the gun. Or had Jacquelyn dropped it? One of us—or both of us—removed the blindfold and the world became twice as bright. We stared at each other through our own and each other’s eyes. Our hands reached out toward each other’s hands and two fingers touched like an old fresco on a ceiling somewhere, sparking an infinity of feeling through the both of us—through the one of us.

Now, we were on ourselves/each other in the grass ripping off our own/each other’s clothes. Our bodies (body?) pressed against each other (itself?), writhing against the dirt and the weeds. Our cock rammed inside our pussy and the feeling of cock slipping into pussy and pussy taking in cock together was so intensely pleasurable that we reeled in a simultaneous, mutual orgasm feedback loop. We passed out wrapped up like a human pretzel, naked and tripping in the grass.

When I woke up and opened my eyes, I felt blind even though I could see. All my senses seemed dull now. A whole half of my/ourself was missing.

Where the fuck was Jacquelyn? Her clothes were everywhere.