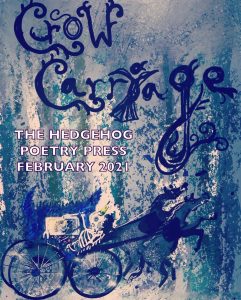 Impure instructions1 in your ear, though he

is not yet here — a carriage rendezvous

as crows will fly.  Candelabrum twinkling

his summons nigh is step one; then, two,

each drop of them, remove from you, submerged

water, grim, without a cloth — evidence

to stain and doff.  With fingers wet, you purge

from skin what rivulets remain of kin

then leave the porcelain pristine. Remove

the footprints, drips in hall — crime scene is

with nightclothes, nightstand you barefoot kick

he says no shoes — his, a bloody trick, he

1Inside the porcelain tub of the deceased mistress of the house, her aunt and guardian, the only living occupant now, the teenage Mistress of Malice reclines.  Blood-spattered and breathless, after her crimes, the murder of her abusive guardians, aunt and uncle, she lets her eyelids fall and concentrates upon the instructions of a dark stranger/mentor as to her next moves.

A dark stranger, only days ago met, in a feather covered Crow Carriage with a strange etching of an avian skeleton – it was a carriage befitting an evil man unafraid to hide malevolent intent.  The Mistress had felt that intent in the pit of her tensing stomach and only entered out of the greatest personal desperation his wheeled and horse-driven belly of a crow.  Her skin electric with the raised hairs of fear, the gentleman stranger beckoned his driver onward.

The Mistress of Malice was well schooled, even in her modest 16 years alive, in the malicious natures of men towards her gender.  Her father had died upon a gallows for his crime against a young neighbor he trapped inside a hole that once was to be a pond he dug, a promise of a present to her mother.  The pond was a lie never finished.  After her departure at the conclusion of the family’s precarious fortune, it became a trap.

Upon his capture and execution, the Mistress of Malice was sent to live in this comparatively expansive, modern home of her “better” relations in the village proper.  Though her lot in life improved materialistically exponentially with clean clothes and deloused hair – the lime and arsenic used liberally had destroyed her hair.  She was allotted a beautiful wig and clothes better than the servants, if not as lovely as the daughters of the house, which, of course, she was not.  Could she really blame them for acknowledging the difference?

Her uncle certainly acknowledged the difference between her and his own young daughters in his regular visits to her bedchamber while his immediate family slept.  Perhaps it was because she had never been raised around him, but he did not seem to think of her in any familial way but as a convenient young woman placed inside his home to serve his needs just as she helped her cousins to dress and her aunt tend to the flowerbeds.  He had offered her much in the material sense, and much had been expected from her in return, even bodily sacrifices.  The Mistress of Malice bore these with increasing distress until that distress turned to a darker emotion of anger and rebellion.  She began to sneak away from the house in the middle of the evenings, donning a stolen red cloak from one of her cousins.  Though she knew she was courting trouble, almost anything now seemed preferable to her present situation.

It was in this state, the Crow Carriage had come for her.  The Doctor, its driver, making his regular journey into town to procure another young “subject,” always female, for a terrible experiment he performed at his dark estate a bleak Crow Carriage ride away.  It was in this state of desperation, sure she was to be dispatched by yet another predator like her uncle, maybe worse, the Mistress of Malice had confided in the sinister noble gentleman her own dark desire for vengeance and freedom.  It had been as much of a confession of the dying as any well-formulated plan, which it surely was not — as she was sure that death was soon her fate.

Instead, The Doctor listened and then spoke.  He gave her careful instructions, his very own blade with a crow carved into his handle and a surgical approach to dispatching a human body.  He promised the child he would arrive to help her escape and cover up her crimes, though she would enact these murders alone.  There would be a price as well. —  she would offer him her two cousins as “subjects” in her place as a proffer of good faith, which she did this morning before her more bloody work.

In this bath, having done her part, she closes her eyes and remembers his explicit instructions, repeating them like a little poem of survival inside her skull.  She has lit the candelabrum, his signal that the house is occupied by only one living soul now, her own.  Now, she bathes and contemplates the rest of the plan.

Her wretched father, never having such a plan when he committed his terrible crimes, hung for his lack of foresight.  Such would not be the case for the Mistress of Malice who felt she had suffered her share and was ready for something else — anything else save more suffering.  Even this bath, her first in her aunt’s modern tub felt like a baptism into a new world if she could only remember all the steps to secure her freedom.  She must clean her prints from the scene.  She must leave no trace of herself in those bedrooms or blood footprints of her own in the hallways.

The Doctor had made it all clear, how easily she would be believed to be a victim because of her commensurate age and gender to his victims, two others removed earlier today from this very house.  It was logical and scientific, a thing The Doctor said prevailed above all other tenants in life.  And no one knew of the removal of the cousins – so if two were taken, why not three?  So she must dress herself in only her nightgown, no shoes, to look as if she was awoken and taken (along with her cousins) – after the unfortunate necessity of the murder of her generous guardians.

“But what of you?” She had asked The Doctor.  Certainly she would be in his care, and she did not want to contemplate her young life disrupted by the careless plans of an evil guardian again – as was the case with her father.  “Oh, I have a plan.  It will require some bigger shoes.”

He would carry out the Mistress of Malice, he had assured the young girl, wearing some shoes borrowed from a corpse – a word that had made the mistress cringe.

“A corpse is a thing that can be made,” he assured the girl.  “This one will have prominent feet, noticeably larger than mine and shoes that will make a larger print and lead to some gargantuan suspect.”

The Mistress of Malice had been both horrified and comforted at all of this new information.  She shuddered in the pink water as she repeated the instructions she would follow.  She had lit the candelabrum.  It had begun.