I’m scanning the toilet bowl for blood. I can’t see any, but I haven’t got everything out yet, so I use my thumb and index finger and start stroking to dislodge the last spits of urine. I’m only 29 and already sort of incontinent, apparently. Just a few years ago I could shoot a urinal puck around with the force of my stream.

Is it a stricture? Something wrong with my prostate?

I research the human body a lot because they say you should know your enemy.

A urethral stricture can impede the flow of urine and, if untreated, this narrowing of the passage can cause cancer. The prostate is constantly expanding — like the universe.

A decade ago, my prostate would’ve been around the size of a walnut; in another 30 years, it’ll be more like a lemon.

But lemons are the last thing I want to think about.

It’s because of this subway ad about bladder cancer that’s been haunting me. In it, there’s a pile of lemons, and one is bright red. “SEE RED? SEE YOUR DOCTOR,” the caption warns: 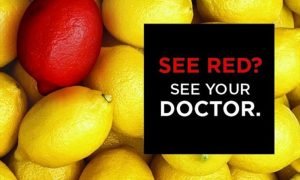 (The yellow lemons are the urine, and the red lemon is the blood from your soon-to-be-extracted, cancerous bladder.)

The point is this: I’m afraid that one day I’ll have to have my bladder removed because of my heavy drinking. That’s what happened to my mom’s alcoholic friend. They replaced his bladder with a urostomy pouch that he forever hides in his jeans. Whenever I see him, I try and discern its outline. He cloaks it well, but I can’t imagine what it’s done to his dating life.

And the last thing I need is an impediment like that.

If I wasn’t funny I’m pretty sure I’d be involuntarily celibate.

So I don’t know why I’ve been disregarding my body, or where the fuck I get off acting like this. But so far I’ve been doing it with impunity, and the lack of consequence unnerves me. It’s like some sort of cosmic oversight — or an evolutionary glitch.

Only in the 21st century is an existence like mine possible. I’d be easy prey throughout much of human history. Nomadic life wouldn’t suit me. I’d be left behind with the aged and diseased. My ancient death wouldn’t warrant any ritual or ceremony. Nobody would be slaughtering any virgins to mark the occasion.

These are my thoughts as I stand over the toilet with my dick hanging out, late for work again.

Five minutes to shave, three to brush my teeth, less to dress. My chest aches vaguely and my jaw is sore, clicking as I swish my alcohol-free mouthwash.

I’ve been grinding my teeth a lot lately.

This can’t be good.

In the kitchen, there’s a running sobriety tally on the little chalkboard I’ve hung by the entrance to my apartment. There are three white lines scrawled on it, each representing a day of the month that I haven’t had a drink or done drugs.

The month is almost over.

Nearby, my glass coffee table is smudged with traces of the night before.

The table is an unexpectedly useful gift from my mom; the glass panels are an ideal surface to snort drugs off of.

When I’m hosting a party, I’ll take a panel out and keep it in my bedroom so I won’t have to share my drugs with anyone. Inevitably my friends will drop drinks and plates right through the empty space.

Something is supposed to be there, but it isn’t.

Choosing my outfit doesn’t take long. My dresser drawers are arranged in neat compartments, like a pill box. A girlfriend once compared me to a cartoon character because I have so many pairs of the exact same clothing items. It allows me to wear what is essentially a uniform, which changes from season to season.

I pull the jeans over the Calvin Klein Boxer Briefs that I’ve already got on. I haven’t worn any other kind since I was a teen.

Consistency like that helps me believe I haven’t fully lost control.

What chance do inner demons have against a man who’s been wearing the same underwear for a decade?

Sun overwhelms the two mismatched and undersized curtains that I’ve got hanging over the windows. I’m not sure why I bother; I’m totally sun-fucked as I leave my bedroom.

I’m careful not to look at the little chalkboard when I grab my jacket off its hook.

Before locking up I scan the kitchen one last time to make sure the stove and faucet are off and that everything is unplugged. The toaster, the kettle — the WiFi router, which I’d forgotten. It’s a compulsion. Sometimes I check three or four times.

I obsess over the idea of accidentally leaving the tap running and flooding my place, or burning it down in an electrical fire.

Maybe I entertain the possibility of these imaginary tragedies to avoid the one I’m living.

(In a few years, my therapist will confirm as much — but that’s not part of this short story, which takes place in 2017.)

Children are running around the playground at the French public school across the street from my apartment. I failed French all throughout elementary school, but their screaming is a language I can understand.

The playground is pretty close to Lansdowne Station, which is just north of the school. It looks like I’m only 10 minutes behind schedule.

I really hope that I don’t see that ad on the subway today.

I’ve even stopped garnishing my cocktails with lemons.