What You Need to Know About Your Cocktails – Henry Palm III

There’s a small amount of mixing to make a perfect mint julep. Efficacy is mostly bourbon. I got lucky with Julia in July because I made her one, is what I think.

Togna picks her up and they stop by around noon. Julia doesn’t say a word. I dig her bikini.
The grill is charring. Julia sunbathes on a floater, rippling the water with her nail tips. I used to distrust the calloused apathy with which some women affect their surroundings. Life’s choices dilute when you open yourself up to the world and let it affect you and you realize it’s less about effect than it is about being unaffected by things. You have no control over what happens, just how you feel about it. I currently share my house with whoever wants to stop by. It has no furniture. I inherited it from my parents. They moved onto a mansion on Riviera Drive. My house sits on Grove Street. It has some signs of life. Burned compact discs with innocuous titles like “Ultimite thanksgiving MIXX” lay scattered around a boombox scratching against the wood-panel floor. Togna and Julia dip into my water and food and I dip into their company.
I’ve learned a lot from Togna and he’s been just as naive as me. The first night we met he snatched a full bottle of beer from my hand and smashed it against a wall. I pushed him down to the ground, then apologized and talked with him all night over cans of sparks. I didn’t see him again until a year later, when we ran into each other on a yacht and drank for hours on the way to the Bahamas. We’re members of an exclusive club of knows-something-you-don’t. At times he’ll say something and it won’t click in my head until a few weeks later. We’ve spent the summer coming up with crazy ideas for what to do with ourselves after college. He doesn’t even ring me before coming over anymore, just parks his car on the front lawn then brushes past overgrown palm trees to my backyard. He stands on the cracked tiles and takes off his clothes, jumps into the blue and slithers out like a red sausage.
Today I’ve cooked some Cuban fritas. I hand one to Togna and another to Julia and grab one for myself. We sit on the pool ledge, Togna to the west of Julia, and I to the east. With shins submerged in bug littered water, chorizo oil splatters on breast goosebumps, a wedge pressed tightly between two buns. Julia is neither rising nor setting. A community of communities of cells pouring sweat into another mid-year. 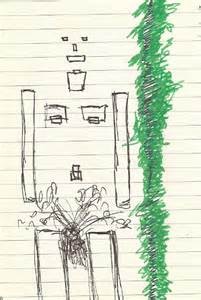 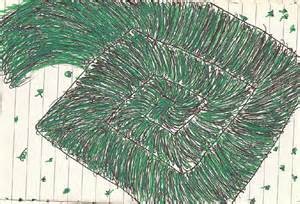 I think back to that cracked out morning when I laid on the dirt at the side of the house and Julia brought me a mint julep, at eleven forty-five or so. I rest my head on her lap as she sits against the yellow-green mold of the exterior wall, rubs her fingers through my hair and her nails on my scalp, and plays Paul Simon’s have a good time on her phone.
The fifth island turned out to be a pile of trash. It’s a mountain dump of irrecyclable human product. Where the pyramid once stood lay only a scattering of emptied cardboard boxes labeled with a red “FRAGILE.” I land in an empty-but-the-bottom-filled-with-tepid-water garbage can. I flip backwards and land on my back. I look out against the sun and see them. Figures silhouetting in a circle by a roundtable. Togna stands discreetly to one side.
I approach on the right with the sun beating at my left. He does not greet. A man in a button down shirt and skinny jeans and brown leather wingtip shoes brings out a cake and places it in the middle of the countertop. He pulls out a brown handle knife and hands it to Togna. Togna, staring intently at the cake, slices three cuts. He grossly misjudges his aim, and I instinctively snatch his knife and trim off an extra amount of the largest portion to make it the same size as the next piece. We put aside the trimmings. Togna nods in agreement. The man in the cyan striped theory shirt takes a slice, and before I can grab one, Togna grabs his own slice. I take the last slice. Togna then cuts the trimmings into three pieces. The man takes his. I make it a point to take mine before Togna. It still feels like an uneven distribution, but there’s no resisting. It’s what I want.