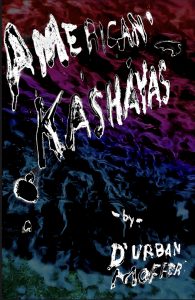 American Kashayas is a carousel projector of Middle Western malaise, a nightmare logicked magick text scrapbook of alchemy: snapshots, colloquys, monologues, somniloquys. Letters, memories. In a cavernous tenor, an opera of slurred speech and motor tics, vaudeville off-color humor, primordial grunts, dizzying in its lurid virulence, it scrolls off the reels of your lids, scrapes the styes from your eyes, reveals the American character as a whirlwind reaped by insidious ills and cancerous forces.  Its locus an engine of dialect-tinged twitches and twinges of the American spirit, a dialectic of dread and lunacy, erumpent sarcasm and sober cynicism. Its panorama of mental illness is mythic, quixotic, toying with satire in the time-honored tradition, negotiating what is currently fashionable or tasteful in literature with hypnotic finesse, intellectually solving for hallucination as the essence of consciousness and crudity as the common denominator among circumspect practitioners. D’urban Moffer gestures to the godhead through the voices of people left behind, wretches only genuine articles hold court with, frayed rags. Schizo quintessence to police your porous well-being from the ledge of inertia. With the soul of a sound artist, D’urban has breathed the nape and traced the spine of the heartland. A collection of stories, poetry and paintings of unprecedented scope, it is a spiritual survivor’s manual for long, dark nights. This is writing you won’t read anywhere else. Always. expat means never having to do the same thing twice. A life work, the lifeblood of us combustible smoldering incinerating for winter. Its fixity is assured, meteorite-carved. Canon-aligned, pro-vice, trend-ambivalent, reader-hostile, and contiguous with numinous realms. Consign this weird anti-art book to your library and never lose friends again, it’ll ferry you through the exhausting Lethean season with constancy and comical abundance, stylistic exuberance never found in books anymore.

In His Image (Surfaces)

Art by G.P. DeSalvo (Back Patio)