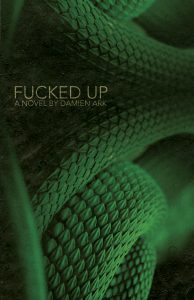 In Damien Ark’s debut novel, Fucked Up, seventeen-year-old Elliott attempts to survive the trauma of being the sole survivor of a serial killer while his abusive mother reinforces his inevitable cycle of self-destruction. Diagnosed with Childhood-Onset Schizophrenia and Post-Traumatic Stress Disorder, Elliott numbs himself with endless sex and drugs, blindly falls into the hands of rapists and murderers, but continues to search for some sense of hope in his life. Set in a postmodern dystopia on the verge of the apocalypse, Fucked Up is an eclectic take on transgressive literature that finds surreal romanticism under the grit of one of the most confrontational narratives ever written.

The book of the summer is now the novel of the year. Enter 2020, combustible and fraught, the mass lapsarian hangover, the Eschaton underway, the fires and floods, the privation, the mass casualties, the lifting of the veil on so-called public institutions, safety nets, governing norms and corporate bureaucracy as a cover for sex criminals, sociopathic predators and insidious drivers of perverse incentives, the drug-depredated populace. Fucked Up is a relentless onslaught of brutality to stagger the fainthearted, an incomparable monolith, a testament to what is printable, a spectacular orgy of the gruesome and profane, of violence and depravity raw, uncut and unadulterated, eerily prophetic, bearing an uncanny resemblance to modern times. This is a tender porn novel for the disaffected, a revelation that insists on your undivided attention, replete with endearing misfits and wanton disreputables. A radio dispatch from the basement of devastation and despair, spiritually righteous. Flickers of beauty and hope haunt each page, as our narrator reckons with their raw deal inheritance and the gift of life, friends and lovers, states of ecstasy and withdrawal, uncommon beauty in the scourged humanity of its world’s denizens. While Ark doesn’t exactly world-build, the atmosphere created here envelops and lingers in the sensorium. Once inside, a reader feels transfixed and their outlook execrated, awakened to the appalling nature of the status quo unmasked and hypocrisies laid bare, an emporium of horrors unimaginable here confronted, unflinching, with a tonal sleight of hand that straddles the comical, the absurd and the darkly distraught and dejected, the frank portrayal of destructive malevolence which through this book will leave indelible psychic marks. Like all redemptive art, Fucked Up ultimately comes to terms with its own hideousness via a tightrope gallows humor and unabashed zeal for the puncta of bliss the written word renders breathlessly. Peduncular, in bloom, unmistakably profound and uncompromising, Damien Ark boldly lays claim to the mantle of transgression as their birthright. It’s their lane now, and may you be emboldened by their audacity and permanently unlearn conformity. Get your angelic kicks before the coming storm, the spoils you reap will blind a god, somewhere between a prayer and a primal scream. Above all, Fucked Up is an antediluvian clarion call, a furious indictment, a work moral and political.

“Fucked Up gnaws on its angst with Ark’s prose like a precision hydraulic grinder spewing an eminently harsh noise opera of apocalyptic paranoias worming through the barebacked orifice of an urban sex-revenge epic that is gloriously captivating as it is inflamed and gaping.”—Elytron Frass

“savagery boils underneath the household. there are shotguns loaded w/ flechettes pointed at you inside of every wall from every angle. snakes with tanto blades & drenched in sweet cologne are hunting you. you & everyone around you is armed to the teeth. escape is unnecessary. we’re all demons here. liveleak gore videos are going into syndication. the whore sells sex soaked in dirt & public executions on the same ticket. a boy fucks his terror down as car bombs cook pedestrians. the trains will keep running off sheer ocean cliffs. with dense lethality damien ark is going to decapitate your moral comforts.”
—MIKA (tokyo_vamp)

“Echoing the apocalyptic poetics of Stephen Tunney’s Flan, the kaleidoscopically perverse interior landscape of Alfred Chester’s Exquisite Corpse, and the emotional complexity of Dennis Cooper’s My Loose Thread, Damien Ark’s astounding debut creates a trauma-scape so massive it transcends the merely personal and embraces the familial, communal, animal, and environmental violence all around us. Relentless in its brutality and boundless in its compassion, endlessly explicit, sickeningly funny, deeply spiritual, and formally maximalist in every sense, this book will try to kill you and then terrorize you back to life with a sublime alchemy that turns filth, rage, humiliation, and despair into something so pristinely, purely human you must read it to believe it because this book invented it. Fucked Up is an era-defining work which stakes its soul on the most perverse notion possible: that hope might flourish in spite of all.”
—Maryse Meijer