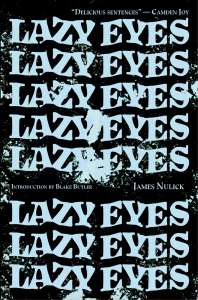 A young man’s Doberman pinscher terrorizes his new fiancée. Two teenage lovers orchestrate the death of an older sibling.An eight-year-old awaits the day he can escape from the man holding him hostage. A man wakes one morning to find his wife has disappeared. A murdered child contemplates Hiedegerrian metaphysics while plotting revenge against his mother. In ten captivating tales of contemporary horror, acclaimed cult writer James Nulick explores the uncanny valleys of modern existence, illuminating verities that have lain dormant, like yellowing grass under a cool rock, for so long.

James Nulick’s phantasmic presence in the global village has only enlarged the most mythic qualities of his writing. In Lazy Eyes, ten interstitially linked stories redraw the contours of human experience to speak for the morally ugly, the innocent, the neonate, even the non-existent— changelings, victims and byproducts of dystopia, illuminating diabolism so ancient and deep as to contain vast grey beauty, verging on a near asemia for the unspeakable that is in fact restless and erumpent, like the murmurs of the cosmos. The elements which make a Nulick reader’s fervor so elusive to distill may as well be the transplanted agencies of numina; he is an idiosyncratic visionary who writes stories only he would ever think to write, in ways only he would ever dream them, imbued with spiritual purpose. Once you’re in the throes of discovering his work, it’s too late. You’re in too deep, losing sleep, poring over his sentences at once lambent and brutal. The most cruel, ruthless truths are treated with gallows humor, abrupt bathos and transcendence, and each speaker is characterized by intimate, surreal details, transfigurational wounds and scars Nulick lashes with exacting wrath only to pull back and probe with impossible sensitivity. It is a book, each word born in flames, black-blooded Nulick leaving nothing but ash, an out-of-body feat where the spine meets the brainstem and the soul ends as the body takes away, rich with symbols traced in familiar geologic, ontological shapes.