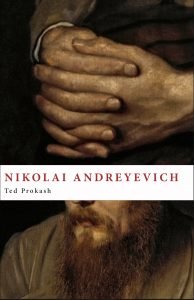 Welcome to a nameless town in Russia, circa late 19th century, the reign of the Tsars, the war machine churning, the love machine burning. Enter Ted Prokash and all the qualities you know and love him for- exacting attention to detail, the everyman narrator, a flair for the heartbreaking human drama, the highs and lows of war and peacetime in the last gasp of an empire, before the dawn of more precarious times. Ted Prokash, whose robust conviction for the classical Russian novel does nothing to suppress his singularly earthy and familiar voice, turns his keenly observational eye on the foibles and frailties of two friends, Nikolai Andreyevich and Vasily Medved, their families, love interests and closest associates. Nikolai Andreyevich is vast in scope for its modest length, generous with its characters as they endure the ravages of time, contend with separation, reckon with ineluctable duties and opportunities whisking loved ones away. Strong women, raffish men, soldiers, anarchists, power struggles, familial intergenerational strife, cloak and dagger palace intrigue, all the internecine quintessential violence of life out of time and place. This milieux is dense and deep as quicksand, these exploits are pornographically profound. These fortunes will soon be pedigreed. Dig it, we’re bringing back the historical novel. From the prefatory author’s note:

You may notice an untoward eagerness on the part of our narrator to characterize certain individual actions, broad societal trends and even the most general ideas as being very “Russian”. This should not be construed as a claim by the author on any special knowledge of late 19th century tsarist Russia. Rather it’s a device in keeping with this book’s central idea: that all people, even when separated by hundreds of years of history, and or thousands of miles of geography, behave about the same. Substitute the word ‘American’ or ‘human’ for the word ‘Russian’ if it reads any easier.

Another Year, Another Interview with Ted Prokash

The Story of Medved [excerpt]

Excerpt: Chapter II of Boingers! A Club for Gentlemen