View cart “Bel – Joseph Harms” has been added to your cart. 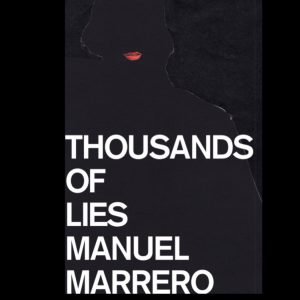 An upscale Polish call girl develops a posthumous reputation as the poster child for the right to die movement. The simultaneous advances in medical science and life expectancy coincide with the human colonization of Mars. A transgendered stick-up thug pulls off a career robbery, befriends a US President, gets used by the CIA, and becomes a father. A media star attempts to change her image. Paranormal visitations threaten the sanity of hard drug addicts, all the while a support group for movement disorders braces as a roundtable therapeutic free-for-all. Is a telephonic method of time travel the real deal, or an exploitation in itself, a device for dredging up juice from a cold vein? This is the story of two men among hundreds of ghosts and trees, from Cuba in the 1930s to New York in 2046. I know folks from the rust belt to the dust bowl who’ve never seen these trees. Go see them. You owe it to yourself.
Manuel Marrero is a writer and publisher in Queens.
Thousands of Lies.PDF