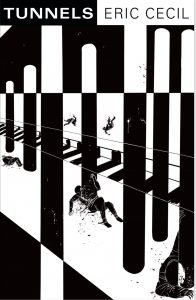 A drifter stalks the streets of a nameless metropolis in an obsessive pursuit. A couple are terrorized in their home by an implacable infestation. A bizarre domestic incident is recounted from memory to a probing presence at a squalid diner. A road trip through shifting, majestic abysses and infernos forms the center of an unlikely pilgrimage. An alluring specter seduces an honest man to murder his darlings in a recursive, cathartic trance. A working stiff shows an apartment and gradually descends into a nightmarish reverie at once claustrophobic and transcendent. Eric Cecil bounds into the literary landscape with six stories of nerve shredding soul searching, of introspection and acute, unsentimental humane observation. Tunnels is an otherworldly funhouse of unsettling architecture, of hidden spaces in the psyche and impossible structures. At each turn, the nature of reality is challenged, revoked and returned. These six stories take the familiar and strange, run them through squalls of cognitive dissonance, exploring a vision lurid and serene, twisted and soberingly beautiful, populated by pulsing throngs and whispering torments, a sun-scorched wilderness of rumination tethered to a stately, suspenseful narrative form. Tunnels is a startling debut of terror and rich interiority from a studied outsider. It ventures to exotic, psychotic places and single-mindedly restores the promise of adventurism in literature. Fire walk with me. Oblique, arcane forces compel you to read this.