Ritual America (A Caged Bird Stands on the Grave of Dreams or ‘how I escaped the Worldwide Church of God’): Matthew Graham in Conversation with Chris Kelso – PART THREE

When asked if he felt like he had a relatively normal childhood or if he was aware that his parameters were more restricted, Matthew is quick to reveal the lack of convention in his young life.

“I would say my childhood was anything but normal and I was distinctly aware of how different I was. One of the major tenets of the WCG was that holidays (Thanksgiving and 4th of July not included) came from pagan traditions and had no actual root in Christianity”

This meant that the Graham’s didn’t celebrate Christmas, Halloween, Easter or birthdays because celebrating your birthday meant that you were exalting yourself above the lord and only he should be worshipped. 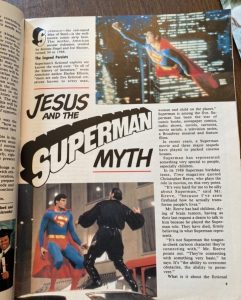 “So in school right off the bat I’m the weirdo. The church was extreme in this as well. If there was a holiday I was told to go to the school library as I was forbidden from participating in Christmas parties or any other celebrations. If a kid was celebrating his birthday, brought in cupcakes or whatever, I had to hoof it out of there and sit like an isolated goon in the library.”

This time in imposed isolation gave Matthew a lot of time to read books and particularly enjoyed the works of Christopher Pike and RL Stine, the work of both writers was considered contraband in his own home. He also made sure to read every ‘banned book’ as a fuck you to his mother and the church. 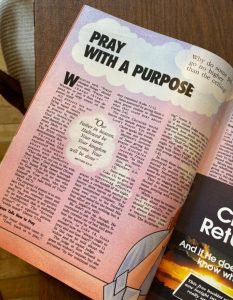 “Other kids would ask why I didn’t celebrate and I’d give the stock response of ‘it’s against my religion’, which no one ever really pushed back against but how the fuck was I supposed to explain our insane belief system when I barely understood it myself? The whole thing definitely made me a bit of a pariah.”

Matthew remembers one kid in sixth grade who found out the Grahams didn’t celebrate Christmas and instead attended church on Saturday. The boy started calling Matthew a Jew, which he found confusing and upsetting.

“In retrospect the kid was just being an anti-Semitic shitbag but was most likely repeating bullshit he heard at home. It still bothered me because of the derisive tone. I had no real clue about antisemitism at that point but just hated the pejorative way that he used it. I can also remember being in third grade and the teacher asked everyone in class when their birthday was.”

Matthew instantly filled with dread because he literally didn’t know when his birthday was.

“All the kids were answering, some of them with gleaming confidence, but then it comes to me and I feel my face flush and turn red and barely squeak out ‘I don’t know’ when she asked me my birthday. She looked at me for a second like I was impaired and then said it was ok. A piece of me just died of embarrassment In front of everyone.”

Matthew recollects looking out the window of his Flat Rock duplex on Halloween night enviously watching the other kids trick or treating. He simmered with quiet envy as his friends got to pick out their own costumes and fill their pillowcases and buckets with candy.

“My friend Emily from across the street would always put together a bag of candy for me and slip it to me the next day and I would eat it in secret in my room.”

Simple things became contraband. Christmas season, with all the toy commercials and the direct marketing geared towards kids, was a particularly trying time for Matthew. 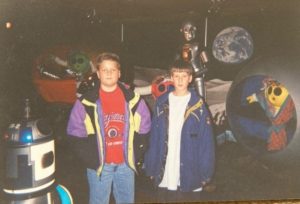 “I always wanted at least one present but it never happened until we left. What I was allowed to watch was different as well. Obviously nothing rated R or anything that was anywhere even adjacent to horror. My mother also had a borderline pathological aversion to graphic violence, whether that be in horror films or any other type of media and would always decry it as the worst thing ever.”

These days Matthew relishes any opportunity to remind his mother that it might be her fault that he became a violence-obsessed adult. Terri’s aversion to violence was so deep-seated that she made her son throw away the weapons of any action figures he purchased.

“So I’m playing with these weaponless figures, made for a weirdly neutered version of Star Wars characters.”

Matthew’s dreams as a young boy were simple. He wanted to be an athlete and have a family but he also had an appetite for the artistic. He read a lot so he was always fascinated by authors and writers. He can remember Eugene bringing home a giant roll of paper from work which Matthew covered with images from a hardcover edition of Return of the Jedi. Matthew laid out the plot on small written chunks and started copying the words onto the paper. This eventually morphed into a unique form of art-brute fan fiction – someone who had seen the main parts of a text but who had been denied several key components, components he was forced to fill-in using his own imagination.

“I would mix in my own details and change things that I thought made it more interesting or better. That was the first time I thought about writing. Then once I turned about 8 or 9 my passion for movies developed.”

Matthew had been very limited in what his mother allowed him to watch but movies that she greenlighted were re-watched obsessively.

“The big ones being a censored version of the Star Wars trilogy, Indiana Jones movies, The Goonies, Batman and I once watched The Gate at my friend Kevin’s house and that terrified me. It actually kickstarted my interest in horror. As a kid I bought this movie review book, a big paperback one that had just 3 or 4 sentence reviews and rated each film from turkey to 5 stars. The book was separated by genre so I went straight to the horror section. I read the horror review section of that book front to back multiple times and learned about so many horror flicks from it.”

CK – Were you encouraged to mix with those outside the WCG faith?

MG – “I wouldn’t say I was encouraged to mix with those from outside our faith but I wasn’t prevented from it either. It always came with a word of warning that their beliefs were different and that they weren’t ‘of god’. When I asked about why kids celebrated holidays and their birthdays and didn’t follow our weird customs I was told that they had pagan beliefs and that they didn’t ‘know the truth’.”

CK – You were very aware that your peers were sinners for doing those things and you and your family were more righteous for your faith?

MG – Yes, and while they were my friends I was very aware that if they didn’t repent things would end badly for my friends and their families.

After interminable delays and cancelations, gratef