Ritual America (A Caged Bird Stands on the Grave of Dreams or ‘how I escaped the Worldwide Church of God’): Matthew Graham in Conversation with Chris Kelso – The Final Say 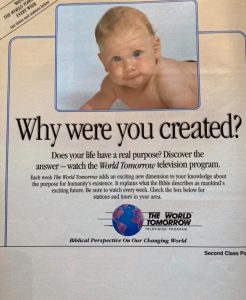 MG – The sexual abuse in the church was related to Armstrong himself. My mom said she read about this after leaving the church but was still keeping tabs on them. After Armstrong died one of top members, Joseph Tkach, became the new leader. He wanted to make the church more mainstream and he started to disavow a lot of Armstrong’s teachings and interpretations. During this process Armstrong’s daughter came forward and said that she had been a repeated victim of sexual abuse at the hands of her father. This rejection of his teachings and then the abuse accusation really is what started the major splinter of the church. It also came out that he had a consensual sexual affair with his wife’s nurse which completely flew in the face of the church’s teachings on the Ten Commandments – the adultery one in particular. So like most cult leaders he was a complete fraud in every way.

No branch of WCG believed in having nurseries or day-care facilities. You were expected to train your child to be quiet and to use discipline to achieve this, so young parishioners were expected to sit in during services and simply be quiet. It was recommended parents keep a blanket at their feet and keeping the child there – sat beside you like a little dog. Hearing this I can only imagine the impact it had on Matthew. He describes himself as a quiet and introverted individual.  Matthew goes on to describe other abusive behaviours he witnessed as a child.

MG – My mom was at a gathering at another members house and there were the host couple, let’s call them P and R, and there were about 10 other members there. So everyone was gathered in the living room chatting and waiting for the food to finish cooking. At one point P and R get into a disagreement and it starts getting heated. R grabs hold of P and literally bends her over his knee and spanks her ass repeatedly right in front of everyone, completely humiliating his wife and shocking everyone in attendance. It became a fairly legendary story but I didn’t know the follow up.
So P, the wife, is rightfully unhappy about this incident and she wants some help from church leadership to sort her husband out. She goes to counselling at the church and once again they lean on submission and obeying your husband and deferring to him and his will. I asked my mother if she felt the church was misogynistic and she said ‘absolutely’. I couldn’t believe that everyone just let this all happen…

When Matthew finally decided to leave the church it was the spring of 95. He was 13 going on 14 years old. He claims his defection had been a gradual process. 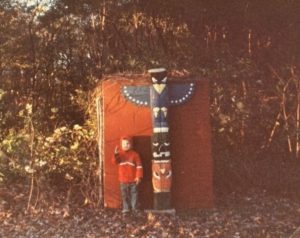 MG – Probably going back about a year I had started asking to stay home maybe once a month and it was allowed. Then after about six months of that it became twice a month, then a month later once a month. I can remember thinking the last time I went to church that I felt like a stranger. It had been 6 weeks since I last attended and I said ‘this is the last one’.  I felt the psychic scars itching. I had to get away and fix my inner world.
CK – But you admit to enjoying certain aspects of the church…
MG – I never enjoyed going at all with the exceptions of the times where we could play basketball or we went out of town for the Feast of Tabernacles. I always associated it with restrictions, movies I wanted to see but couldn’t, food I wanted to eat but couldn’t, music I couldn’t listen to, books, TV, what I think, how I feel, imminent destruction, don’t sin, your friends are going to hell, you’re not really one of them, alone time in the library, a scary book, the literal devil in a movie… All of this stuff and more I associated with the church. It was hell but it was why I was different, why I was quiet, why I was so anxious as a kid and how much it persisted into adulthood. I can remember once my mom said she was looking at some old stuff from school when I was in second grade and it was asking things you like and things you were scared of and the thing I wrote about that I was afraid of was making a mistake. She said she wondered if she pushed me too hard not to make mistakes but thinking back with Armstrong and his embrace of ‘excellence’, his demanding of it, there’s no way it didn’t filter into my deeper consciousness.
Leaving the church to me meant joining the ranks of normal people or what I viewed as ‘normal’ at the time. It was a weight lifted off. First off just on a level of immediate joy was having a full weekend to myself. Not having to start the Sabbath at sundown on Friday and not having church on Saturday looming over me was amazing. As an adult I have a borderline obsession with having my time respected so I think the root of this may be in my bitterness about having that time taken away every week.
CK – I’m curious if there were any other atheists in the family?
MG – Well, my interest in film was growing and I had an uncle (my mom’s brother) who had been in the navy and was an open atheist who I stayed with from time to time. He showed me the local alternative stations and played bands like Nine Inch Nails, Soundgarden, Ministry, Devo the soundtrack to Repo Man. All this good stuff and he was also sure to remind me never to tell my mother.
CK – Where was he living?
MG – He lived on the campus of Eastern Michigan University where he was going to school after getting out of the navy. He was also a vegetarian and it never bothered me that I didn’t eat meat there because we always did fun stuff like listen music or watch movies. I can remember spending a day watching all the Planet of the Apes movies. Getting away from the church meant being able to do all that stuff but at home. He probably saved my life.
CK – And what was your uncle’s relationship like with your mother?
MG – Well, this one time my mom branched out and took a religions class at a local college and as part of it they were asked to speak to an atheist and get their aspect on religion. So my mom chose my uncle and I was probably 10 or 11 at the time. I was in the next room while my mom listened to the tape of the interview she conducted with my uncle as she transcribed or took notes but I distinctly remember him saying that religion was the opiate of the masses and that it was used to keep people under control. Not a single time in my life had I heard that before but it absolutely infected my thinking.
CK – It must’ve been like waking up from a deep sleep.
MG – It was. For sure. More than anything though I craved normalcy I was tired of being excused from holiday functions, not having a birthday, having my head filled with nonsense for two hours a week. So much of it as I got older already seemed like total bullshit. None of the stuff they predicted happened, as my imagination grew the less of a hold it had.
CK – Do you think the alienating rituals and practices played a part in souring you towards the church?
MG – If they had a softer touch? Who knows, maybe I would have believed longer but they were so outrageously controlling and restrictive it just made me want out once the choice was there. Plus as a kid when people ask why don’t you celebrate this or that and you say ‘because of my religion’, it’s such a weird answer. It needs more context but you’re a kid so you can’t provide it to other 8 year olds. I knew I had internal theological debates going on in my young head but the adults never questioned it. You mention religion and everyone just let’s everything slide here. 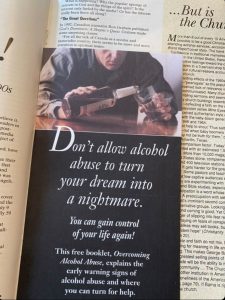 CK – What do you think about America’s relationship with religion?
MG – It’s clearly unhealthy but in retrospect it strikes me as odd or funny that no adult ever asked more about my beliefs or found it strange that I left during events to go the library or why I didn’t eat pork. Maybe it’s not that strange though, keeping to yourself and not interfering were a big part of where I lived.
CK – Once you made the conscious decision to abscond from the church you must’ve binged on a lot of popular media?
MG – When I left the church I just indulged in every movie I could get my hands on and just listened to every album I could. I bathed in everything that the church was against.
CK – But you became an instant atheist? There was no bridging or transition via other spiritual practices? The fear of god must’ve been instilled in your DNA having grown up in such an environment.
MG – I thought I was an atheist but I really wasn’t. I was still scared of god. I knew better and I knew the truth but I was still going to be punished. I kept that fear well into my adult life even after being away from it for years. I felt there was going to be some form of retribution around the corner. The idea that you’re always under surveillance and he’s watching your every behaviour – from what you eat, to what you watch, to who you want to fuck is under his observation. There’s the right way and there’s the sinful way. Even with movies it affected me for years. Every time I rented a horror movie about possession or demons that little thought back there ‘you’re asking for trouble’. That’s how much they hammered that home. I still think it sometimes, as weird as that is.
CK – How else has the religion stayed with you or shaped who you are today – guilt, anxiety and existential terror aside?
MG – Unsurprisingly they strongly believed that Ouija boards were evil and literal gateways to demons. But they came up with these terrifying scare tactics. I remember being told that any spirits you contacted through them were actually demons posing as a dead person. My fear of this was cemented at an early age. My mother told me about using a Ouija board as a kid resulting in ‘someone’ calling them through the phone. Now my mom isn’t one to tell stories just to scare me and I don’t believe in ghosts. I think most likely she was playing with a Ouija board and coincidentally received a prank call from someone or that her friends even set her up. But I kid you not, between that story and the church going on about them I would never have a Ouija board in my house. 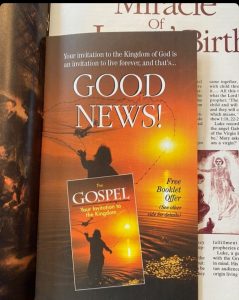