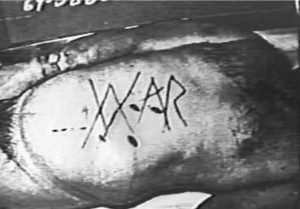 “There will be no brain to understand what is God.”

The man walked. The man walked into the woods. The noise soaked land buzzed brightly in the heat. The man walked with a boy.  The boy was not his son. The boy was no relation. The boy walked in front.  A white leash looped around his thin neck, stretching out like spit. The leash connected him to the man, the man who walked him.  They walked in silence. Trees loomed over the path.  The grass beaten flat. The spine of each stalk bent in quiet agony. Deer used this trail. Iron railroad tracks patinaed with age led the man leading the boy.  No human eyes were on this strange couple walking in the strain of summer heat. Trees’ dark burls stared blind, animals watching in alcoves of ferns and brown wood. The man lead the boy. In the pitch of quiet the man began to speak. Words slow as custard gurgled from his throat. Like a lamb, he mewed these words to the frightened child.  He came to him with honest speech. In this he found solace.

The man’s mouth opened and closed like a steel trap.
Drool moved down his chin like rain thick on a windowpane. The boy’s eyes crossed in confusion. The boy shook where he stood. The boy opened his mouth. He screamed with scorching throat, in blood heat he shrieked. The man again began to speak.

“I am sharing these things with you.
I am sharing this.
Right now this hurts
but soon
there will be light
and it will shine through your eyes
and I will drink it like Honey.”

The boy screamed. Leash tightened around the flute of his throat. Spit dribbled out of mouth frothy as wool. The boy dribbled pink, the blood cut the spit. Man lapped the nectar of his fear. Trees hanged in low witness. Animals ran from harshness of bone. Meadow burned with the fire of midday sun. Rope cutting deep into thin neck, marking strange runes into the softness of youth. The roughing rope leaving burn marks blotchy and cruel on the horror of flesh. Rope roughing traces hot as nightmare. White of eyes straining open, burning black as beetles in the sun.

Thick cut in belly of earth. Water drainage running through bed of land earth chewed like limbs through wood chipper, mounds of clay yellow and mounted like a deer head on wall. The banks of the drainage whittled like soft wood carved with blade of God, excavated drainage heavy with past rain and hot summer muck. Drainage arching through woods like a spine. Tracks of deer hoofs and large boots sunk deep in the mud, meandering among used gas station cups yellow as a gold finch. The walls of ditch higher than a man. Still water coal black and filled with mulched leaves, decomposed and hot amongst the trash and dead body of boy. Black bugs skipping on top of water like stones, microscopic jaws tumbling flesh like meat grinder. Black of rubber tires black dead leaves twigs decomposed hot next to boy body. White tennis shoe stuck on top of mud dyed with ink of water thick streak of black blood painting its side. Laces missing the laces used for other tying. Boy body pale and thrush white against black muck of ditch, tissue pale white as ant eggs in the black of their teeming mass. Boy body pale all blood drained veins like sand testicles dry as cattail fluff. Body trussed like pig, wrists thin as fluted reeds tied with shoelace to tiny ankles. Boy bones seasoning in heat of death like cords of wood. Throat lined with tightened shoe string, ligature marks purple as eggplant hyoid bone snapped like twig in the velocity of rage. Knife wound deep in mildewed scalp, meat washed like baptism pale pink as pomegranate. Eyes filled with slurry thick as oil, black blood bowels evacuated in fear, mouth slack, ears clogged with mud to sense their own dead rhythm. Mud snuffing mouth that sobbed for mother deaf with distance. Bones holding panic, old fear beating heat in guts of dead boy. Body haunted with pulsing of strange rage.

Man with hands large and tanned as leather gloves shovels blood out of boy body cleaved sternum wide as a spread labia the mouth rooting hot through blood like a truffle hog finding organs pulsing fevered nose and tongue kneading heart like a cat bone of sex hard as pick axe tongue swabbing the outside of heart beating slowly soft tissue hot and sludged as lava the breast bone split like woman’s legs the man turned high like a gas range frenzied supping blood like juice of sex frothing like rabid dog at the heat of this boy’s dying huffing  blood hallucinations thick as clouds spattering the walls of his breast bone the hallucinations of death thick and hard as stool boy sliced bone to bone wounds hanging like turkey wattle current of blood pooling in chest the ribs like river stones pounded in flood chest gorged like quarry the neutering blade burying its rage into soft fruit of the boy clipping his root like the shearing of lamb blood ejaculating onto fingers reach back into puff of tonsils into hole into orifice of throat into scorched flesh from dirty nails strep of rage tearing out teeth of sucking mouth the tongue red and ulcered from hands with excrement buried under nails rusted bits of blood torn hairs like burrs from burdock stuck under nails the hands strange with slurry of dead boy the stomach holding cum like sour milk of barrel chested prick stuffed like ham into gummy mouth teeth removed like ivory stones bleached out by sun rectum penetrated like pig rutting violent against wooden post empty and impotent and mute in birth the boys rectum filled with cum like sour milk in confused impregnation of hate eyes white as terror-cum spread through body of boy replacing blood that fled body to dribble into water dark with its iron smell the semen drenched trees bearing down like bowel muscles burning with shit out of body the woods bearing down like pelvic floor pushing stillborn from burning womb the woods hot and filled with pain of rot beating like wings into current of air woven like film on the broad head of victim.

boy dyed black by dust blood sparkling through windows like stained glass in church man bent to his work fondling skull boiling with thick tar of horror boy’s hair slick with sweat and mud and blood glistening like dog fur the meat of other beatings spread panic in the tomb of his bruising boy screeching like rabbit slaughter mans hand muzzling mouth the gut hook curved and sharp as a butcher birds beak glinting in barren light hoed the skin hoed back to show the wilderness of bone like white rocks in black soil of the body hacking blood out of the boy vomiting blood into cupped hands of man like receiving of communion pain fermenting in the liver of the boy the man excited by the blood like a rat sniffing density of murder the screams deforming air warped with the deep pain of being the sun outside house torturing plants with thick blades of light the milk thistles starved for boy blood the creek outside bubbling calmly as blue sky the boy castrated to God the pelt of his soft loins removed limp as a sock the man bent to his work spattered like a painter face freckled with boy blood hot flecked as molten metal the man forging the spirit from the tortured flesh the grip of flesh peeling like the rind of fruit the belly sliced the surf of blood touching toes like tide of creek gurgling out of window the man bent separating flesh from stud of bone man bent murmuring psalms in the ears of the boy man murmuring dense and heavy as lead in the weighted air the prayers of man twisted with love for the hallucination of his Lord the gash is where the lord will finger the tenor of your trembling, the blood is the door through which the messiah will enter the kingdom of your skin, the boy cored body a rag of blood the house silent as an owl nocturnal and silent in air the land outside this uterus of suffering green and fresh as daisies the creek sloughing over rocks peaceful in their age the sun drying plants all reaching towards its warmth inside house mattress covered in loose hair dried blood brown teeth the curing meat of boy abandoned