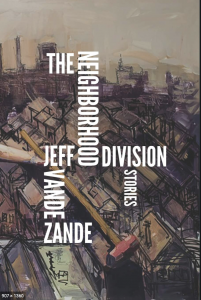 The Neighborhood Division by Jeff Vande Zande is a collection of short stories, and it isn’t terribly long, but it has taken me a little while to get through it, and that’s a very good thing.  Each story, while concise, is so dense with ideas and/or concepts that they demand a period of cooling down after–an absorption period, perhaps.  Each one, in its own way, leaves the reader to grapple with the implications of what they have just read, and to sort out the emotional impact of it.  Beginning with a relatable tale of teenage suburbia, the stories grow more surreal, bending genres and paving strange roads through the reader’s mind.

Vande Zande skillfully plays with his information, manipulating what he allows the reader to know, and what he forces the reader to guess at.  It’s this game of hide-and-seek that often sneaks something into the reader’s mind without their being aware of it, and often, I have found myself at the end of a story wondering if the darkest parts of it might have been a fabrication of my own thinking.  This is wonderfully disturbing, and not accidental.  It is one of the author’s great skills that he is able to weave a fictional story that can somehow reveal the reader to themselves, and it is thematic to the collection.

The Neighborhood Division delves occasionally into the realm of literary horror, family drama, comedy, and at times many of his stories push against the boundaries of traditional genres.  It achieves this while still remaining cohesive as a singular work, and without feeling as if it is trying to be anything that it is not.

There are stories about self-defense, running, home renovation, condominium committee boards, insomnia, sleepwalking, and dementia.  But none of the stories are really about any of these things.  They’re about people, as all great stories are.  His descriptions of families, both dysfunctional and otherwise, are warm and real, even when they are also grappling with something cold and unpleasant.  And, it’s worth saying, real families often do deal with unpleasant things.

It’s tempting to dive into each story and offer my thoughts on them, but one of the real joys of this collection is to be found in the pleasure of discovery.  They are well organized as a collection so that the mood of the next story nicely fits next to the mood of the last.  That’s not to say that they segue together, and there’s certainly nothing predictable in their arrangement, but they seem to fit next to each other without in any way borrowing anything from each other.  Going from one story to the next (whether you need to take a break between them or not), feels crisp and exciting, like tearing the wrapping paper off of a new gift.  So, in the interest of preserving this pleasure, I will refrain from visiting the specifics of the stories themselves.

But his mastery of the art of storytelling is something that must be read to be appreciated. Here is a short excerpt from one of the stories in this collection, titled “Distance”

In the distance, the muffler fades, but grumbles at the edges of earshot. He holds the stop sign, cold metal in his fist, and with his other hand pulls his ankle up, stretching his quad. He counts and then switches hands, legs. He lets go of the sign. He rubs his palms and fingers over his arms vigorously. He hugs himself. Closing his eyes and then bending, he reaches towards his feet and stretches his calves. The joints behind his knees tingle and burn. His house is behind him, only two driveways back. He wants to rise out of this stretch and just run. He wants it to be easy tonight. Sighing, he turns and looks towards the second floor.

His daughter’s light glows. Damn it. Still crying. Her fever was slight, but she’d thrown up. Maybe she is throwing up. Or maybe a phone call woke them. He shudders. But, no, she wouldn’t. He’d told her not to.

His wife’s words come as though she were saying them to him now: “Every night, jogging? You have to?” He told her it wasn’t every night. It was every other night. “And I should get to do something, shouldn’t I?” She didn’t answer. “An hour,” he said. “I’m gone an hour. I have this one thing I like. Don’t make me feel guilty.” She shook her head. “Fine,” she said.

He touched her arm. “I’ll be one hour. I just want to get an hour in.”

He changed slowly, tied his shoes slowly. The stairs creaked when she brought Chelsea up to bed. She’ll sleep now, he thought. They’ll both sleep. The fever will come down. She’ll sleep. He padded down the back stairs to the back door. Closing it, he heard Chelsea cry again. Can’t be. Must have been the hinges. He locked the door. He put the key under his driver’s side tire like he did every time, so as not to have it bumping against his leg in the loose pocket of his shorts.

One of the things that Vande Zande does exceptionally well is character, and he does this most often through relationships.  None of his characters exists in isolation.  They all seem to interweave with each other and form parts of each other, and I think this is a lot like people really are.  We all carry pieces of those we love–or hate–inside of us.  We all are neighborhoods within ourselves, a community of those who have left their impressions on us, be they lovers, parents, children, enemies, or friends.  This sense of community, within and without the characters, brings life to the stories and makes them seem to breathe.

He also treats his characters with respect, even when those characters are objectively rotten people.  This is something I hold in especially high regard for an author, because I think we all, at times in our lives, are rotten people.  It is nice to see characters portrayed honestly without feeling as if we are being asked to judge them, or worse, being told to.  This respect for his characters creates a feeling of honesty and vulnerability in his work that makes even the darkest stories in it a pleasure to read.

I don’t think that the stories themselves are meant to describe a single neighborhood, but in some ways it feels like they do.  As the characters are informed by their relationships with the characters around them, so too is the whole of the collection informed by its relationships between stories.  They feel cohesive, as if there is a single, whole story being told by the many.

If there is, then I think that story is about us.  It’s about how we live in this world and how our choices create a web that spans many other lives and affects people across a wide range of time.  Seeing ourselves clearly always involves a certain amount of darkness–of discomfort–and in this case it is no different.  But honesty holds something, even in its apparent ugliness, that is more than any synthetic beauty can ever hold, and that thing is truth.  You will find it here.