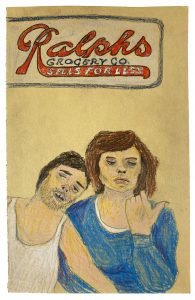 This was ten or fifteen years ago, in another life. I was living in an American city that didn’t even need a name. They were all the same by then. I met Dennis that year, and I fucked him cause he had COVID. I was on parole and was looking to get to the edge of something. I like it there, on the edge, as close as you can get to death. You have to feel like you’re going to die to really feel anything. Fear is the funniest emotion, a real clown of a thing. I like being afraid. When I was about sixteen I lost my virginity to my next-door neighbor, a forty-five-old dude with stage four lung cancer. He taught me how to shoot heroin. He said it was a miracle drug. He also said it erased pain. He used that word – erase. That’s exactly what it did. I got hooked on the stuff. Later on, I started mixing heroin with ecstasy, and that’s when I started to see God. Soon I was in and out of prison, rehab, half-way houses. Then COVID hit just as I was finishing up a six-month stint in jail. I’d been locked up for indecent exposure. I couldn’t believe of all things that indecent exposure is what did me in. It’s funny, cause that’s the one thing I was actually innocent of. I was drunk and pissing behind a Chase Bank when this cop saw me. I got mouthy, and he said I flashed him, even though I was just taking a piss. That’s how I ended up having to register as a sex offender. My rap sheet was a mile long by then – forgery, DWI, disorderly conduct, trespassing, first-degree assault, it went on and on. I met Dennis a couple of weeks after I was let out. Dennis was on the sex offender list, too, but I didn’t know why. He wouldn’t tell me what he’d done. I met him in an all-night grocery store. I had the night off. I was working the late shift in a shipping and receiving department, loading and unloading boxes of foreign-made trash. There aren’t many places a sex offender can go, so usually, on my nights off, I took walks. Usually, I’d stop at the grocery store just to wander the aisles. I liked how bright the grocery store was. I also liked that the grocery store was open 24 hours. So I went to the grocery store a lot. Dennis did too. The night I met Dennis he was looking to score. Junkies can tell always tell who their man is, so Dennis and I beelined for each other. I was staring at a wall of ramen noodle packages. I always liked the design and color of the ramen packages. Dollar ramen noodles are and always will be my favorite food. Dennis was smoking even though we were inside. He asked me what flavor of Ramen was my favorite, and I could practically smell the junk on him. COVID was ravaging the country, and we were the only two people in the grocery store not wearing masks, and the security officer eventually asked us to leave. Dennis stubbed out his cigarette on the tile floor, told the guard, “Eat my ass,” and that got me laughing for the first time in forever. Then we left. Neither of us had a car, so we took the bus to the park. I bought us dope off some guy without a name – the most reliable guys I’ve ever known have been nameless drug dealers. We went to Dennis’s apartment. He lived with roaches and mice. I could hear them in the corners and in the trash can. Dennis told me he had COVID. My heart raced. “What does it feel like?” I asked. “It’s real,” he said. “Do you think you will die?” I asked, and I could feel the smile growing across my face like two claws were ripping at the sides of my mouth. Dennis laughed at my smile, but he also looked a little spooked. “You’re sick,” he said. “Not as sick as you,” I said. We smoked dope. We shot dope. Then we screwed. Then I left, and I never saw him again. I remember right before I took off, we were lying in bed, and Dennis reached over and picked up a big black Bible from the floor. He opened the Bible up to a dog-eared page and read me his favorite passage. I remember he was laughing hysterically as he read it: But the cowardly, the unbelieving, the vile, the murderers, the sexually immoral, those who practice magic arts, the idolaters and all liars — they will be consigned to the fiery lake of burning sulfur. This is the second death.