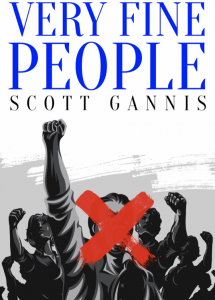 Whatever I say, let it be known I’m biased. I got to read drafts of Very Fine People by Scott Gannis before it was published and I loved it then and I love it now. I’ve been jealous of his ability for years, and I claimed his work as a personal favorite in our MFA cohort. We’ve gotten drunk together. This is not some kind of impartial rundown. This is me, writing my first ever review because I’m passionate about this specific book, written by someone I’m fond of. This is about a book where the protagonist teabags the President, and how I think that’s a funny and cool thing to write a book about.

There’s a commonly spread claim I cannot confirm the veracity of, that the CIA funded the MFA programs of the postwar era to discourage political writing. The subtle, refined, internal novel trumped the bombastic external maximalism, the blatant screed of political belief. Oh sure, people like Vonnegut just fine, wink, nudge. But wouldn’t you rather read Chabon? Wouldn’t a little Mysteries of Pittsburgh, where queerness is an internal struggle and not an external fight for survival, do you a bit of good?

Not that there’s anything fucking wrong with Chabon. But there’s no denying that the political novel has given way, at least in the mainstream, to the personal one, with the excuse that the personal is political and that something like Sittenfeld’s Prep can quietly talk about class and race and all kinds of other bits and bobs of contemporary political effect and that this is just as good as saying the quiet part with a megaphone. As if this is a satisfactory antidote to the explosion of reactionary propaganda, the endless xenophobic handwringing about Russia and Mexico and Canada, as if the American literary novel can fuck its way back to relevance through some polite flirting. Then again, that’s not the goal of such novels, and they meet and even exceed the standards they set themselves time and again. I don’t want to curse the MFA novel: It’s good for what it is. I’ve written one. There’s nothing wrong with a nice, personal story that just happens to be tinged through with contemporary concerns that feel real.

But this book by Scott Gannis, Very Fine People, says fuck all that. It wants to go ape shit.

Very Fine People is something different, a true outsider piece that eschews subtlety with such vicious glee that its transgressions against good taste would be immature were they not so well executed. Our boy, our main character, absolute legend Jude Glick, has a voice unlike any other contemporary protagonist. We’re talking endless self-deprecation, oppressive suicidality, an utter rejection of the “It Gets Better” model of moral arcing we are so accustomed to. Instead, things get worse, not just materially but inside of Jude’s head. Make no mistake, this is a personal story, and all of your internal logic, growth, changes, the usual literary suspects are here with bells on. But it’s wrapped in a confrontational narrative where things change without meaning, good fortune is based on luck, and merit is a cosmic joke.

It’s a Midwestern novel with queer subplots and a repudiation of fascism, not just the guns, grits, and gravy, build-the-wall kind, but the smiling intersectional kind, the kind where you’re giving means tested handouts to a lucky few that grow more and more meager year over year, while insisting that you’re doing all you can. Liberal, conservative, do we care? They’re all very fine people, yes they are, and Jude hates all of them with such chthonic joy it’s impossible to look away.

And of course, it’s funny. Jude is a stand-up comic, which according to my reading is the worst job, and he’s self-deprecating to the point of farce. The stand-up bits themselves are pointedly less about convincing you Gannis can write a joke and more a kind of anti-comedy, each one going off the rails almost immediately. The joke is always on him, and he knows it, and he can’t stop making more jokes at his own expense. Misfortune is a common source of comedy but here it’s metered out with humanity, laughter meeting cringe in an unpleasant, visceral shudder. Jude rips through painkillers and booze at a cathartic rate, which only fuels his rants and makes the situation funnier. Throughout my reading I couldn’t shake the feeling that the sum total of these combined effects should have been unpleasant, except instead of that all I could do was relate. People drink, it’s a fact of life. And they drink more when bad things happen, which is all the time, so maybe a bit much is the exact right amount.

The plot deals directly with the election of the man in charge, our outgoing President, whose name is never mentioned and whose presence is never missing. But Gannis wants you to stay focused on the invented characters, not his masterful impression of the worst public speaker on television. Fascists, rich kids, drunks, immigrants, a rotating cavalcade of the worst America has to offer mixed with some of the best. And in the meantime, Jude comes to question his own pessimism. Are things really as bad as he says? Is this manipulation, are you being swayed? Are cities this corrupt, is life this random and cruel? Fuck an answer, because it’s time for another random scene of chillingly plausible violence.

This is a novel with an opinion. Not just an opinion, a mission statement, it’s got a goal in mind and by the end it’s sailed past the markers it laid down in the first pages. We’re often told not to make a novel about something, which is maybe why Gannis chose to make it about what seems like everything, the economic and political reality that has saturated us, leaking into our very eyeballs day after day. In many ways it’s an exercise in nostalgia: Remember 2016, which was 30 years ago? Come on, let’s go over it again. Before the man in charge was revealed to be more mascot than despot, before the breathless promises that he would be forced out of office any day now, before the fucking pandemic. Let’s go to a simpler time, when out fascists thought people gave a shit about what they had to say.

And that opinion, due to the clever bait and switch of time, is actually fact. We are oppressed from all angles, failed by civil servants, and ground in the teeth of gears that do not know we exist. It only feels like opinion because the novel so thoroughly casts off the shroud of the exclusively personal. This is the glorious no-wing view of politics, the real horseshoe theory, where apathy swings back around and meets Leninism right where it stands waiting for you to realize you’re getting fucked.

There are debts owed here, to Heller and Vonnegut and Dorothy Parker and probably Bill Hicks, and with the violence and prejudice and absurd ending it could probably be classified as transgressive literature, that now meaningless label which hangs about haunting so many of the best novels. But mostly it defies genre as easily as it defies good taste, and is all the better for it. You can imagine a bunch of bearded dirtbag left podcasters enjoying a good chuckle with it, an image I like to imagine would infuriate Jude. Then again, what doesn’t piss that guy off? And good for him. Fuck it.

Buy your own copy here: