Rachel grimaced, Maurice was staring at her vag again. She tightened the cross of her legs. What do we dip the wreath into? This is the culling season. Liver. A man with an AKG C414 XLS Large-diaphragm Condenser Microphone hunches next to her breathing heavily. Maurice is standing holding her child’s head. They are fifteen.

Maurice glances over at Rachel, camel toe again. What a damn slut. He breathes in heavy. Mothers are always so upset when their kids die. He stroked the head he was holding, the whole thing felt nice. Orange hair fixed between his forefinger and thumb. When will a child come home from Textile Relapse? Needles only inject microchips. The guy recording the sounds of Rachel’s pussy looks annoyed.

They were supposed to birth new celestials. All the government reports pointed to it.

Rachel briefly fondled herself to throw Maurice off. Just because his cock was supposedly blessed by the Universe he really thought he could just eye her up like that. She looked at the bars of their very large cage, suspended in a Mid-Grade-Void-Field. The mic guy shoves it way too close and she snaps at him. The three of them in this cage, plus the head. Comets are stars. Microwave individualism is a New Age of Disgust. Fucking Respect Senator Dan insisting on this close monitering, the field mic guy was a loser. Clowns in the radiator.

Maurice saw Rachel scoop her fingers down under her thin peach sweat shorts into her funnel trap. What a Card-Carrying-Upper Fag, but that hole. He cracks his knuckles. Three months in the MGVF, just so that he could loosen up a load and make a centinel. No big deal he got to Big-Cream more than he could in the he ever could as a milker at the Low-Grade-Vegas-Wall-Street-Floating-Rental-Homes. Hitting it four or five times an hour, couldn’t beat that.  Her kid’s little twink skull in the cage as encouragement, to keep her on task, boring.

In the Celestial Body Monitoring and Procreation Office a third clearance level scientist who was getting fucked by a new-meat-boy accidentally nudged the cage clamp button, releasing it into the MGVF.

Rachel was wearing horse flesh. They fallings. Clothespins. Maurice is inside her. Marsh in childhood. Connecticut torn down.  Maurice howls, prehistoric re-re-rendering of final breaths. Half of the head mimics their terror. Long hairs close around the cage, grow into it, wrap around each of them. They die and are brought back as they were five minutes before. Pause in crash.

In the short stop eyes meet one another. The head, the Monitor, Maurice, Rachel, how many of them were there? The Monitor pulls the XLR cable from the AKG C414 XLS, and without hesitation thrusts the metal as forcefully as possible into his arm. He dips his finger into the wound, using the blood to draw on the cell floor while breathlessly talking.

Maurice did not respond, he had never felt sensations like those before. Everything was nothing, nothing was everything. A late night in Plasma-Lost-Vegas-Casino-Sitcom dropping chips into the anuses of a triple ass chemical whore. His manhood could not be defended as it did not exist. The Moderator was more human, no question of organ.

“We are in between gravity fields folded along tangent functions, suspended between the most concave-convex point of the rightmost fold and the point at which the slope of the curve of the left field is the greatest before decreasing.”

He gestured towards what he had drawn with the blood, hypothesized to look like the below 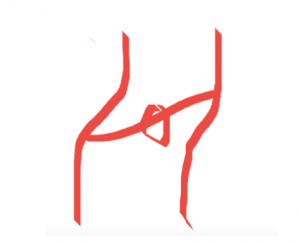 It has been widely acknowledged that the drawing resembles the gates of hell as depicted by the No-Clit-Rememberers, a cult like society of women who were loosely associated with the Anti-Organ-Recording-and-Vegan-Free-Sexuality terrorist cells that rose to popularity in the late 90’s. The resemblance does not hold any large significance, although several books published on the matter tried to argue the imbalance in gravity folds was similar to that of people who felt that the recording of their sexual measures limited their freedom.

Along with the image were a handful of complex equations that he continued to work on feverishly.

“With what appears to be the loss of the Government-Suspension-Capabilities of the  MGVF our weight is shifting us down from the concave-convex point of the right fold to the wall like slope of the left. If we drop weight we will oscillate between the two fields, hopefully until someone at the Celestial Body Monitoring and Procreation Office figures out what is going on and fixes this mess.”

All three of their eyes met. In New-Florida the owner of a chicken slaughterhouse scores a hole-in-one on the 14th green. Dust accumulates. Rachel stands up jerkily.

“It’s not going to be me. I’ve been getting fucked since I got here and I’m not about to get fucked again.”

Maurice snickers uncomfortably. The Monitor says nothing. He had been in this situation a few times before. Always the male would resort to violence, it would not be long now. In the 3 minutes left he predicted it would take one and a half for Maurice to attempt to smash Rachel’s head against the cage bars, then squeeze her corpse through. Rats can be trained to retrieve condoms from the homes of rich men at which time the sperm held within can be used for insemination and then bribery.  Golden Retrievers are ugly dogs. Rachel was clenching her fists, just because Maurice was a baser and she was not he thought that he understood violence better than her. She understood violence just fine, she personally enjoyed holding the holo-whip and slinging it onto the backs of the Inter-Media-Frozen-Workforce her father employed in droves.

None of this bore any particular importance, the Monitor had forgotten to carry the two in one of his calculations, they were crashing into the left gravity field two minutes earlier than expected.

The three of them all wore ballerina suits. On a large stage made of cotton candy they stood in a sine function pattern. Large peppermint candies with shining faces and small perfect mouths sang

“Where do we begin, on the mother’s doorstep, on the physics of longing, wear to we bear our final correlations, the large bear, the gentle deer, in it goes, into your ear.”

Maurice thought it was snowing. Racoons ran among their feet, tearing up chunks of the floor which spit out billows of steam. The Monitor was spinning, balanced on his nimble big toe. His feet were naked and his toenail was missing. Above them the steam formed a sentence

“Life Equations Are Not Free, You Are All Men and Women.”

On a train Rachel looks at Maurice, his face melting like a candle. Around them commuters move about their day to day tasks. She mouths to him,

“Can I love you scum of the Earth, can I feel you fill me up one more time?”

Maurice no longer has any external features, his face a puffy mound, he pulls down the work slacks, holding onto the subway pole– instead of a penis, the head of a female snapping turtle. Rachel screams.

A seventh clearance level scientist monitored the scene. She cleared her throat to make an announcement.

“We have had incidents like this in the past, but we are pursuing something greater than a single, or several, human lives. Ashely.. er… Rachel and Maurice both died while attempting to bring new celestial bodies into the world, and Bill, well he knew the risks. The most important thing we learned today is to only use the new-meat-boys in the designated areas, and well… uh…”

The scientist trailed off, she had nothing to say really, she had not even wanted to be assigned to work at the Celestial Body Monitoring and Procreation Office– in two months once people had forgotten about the incident she would apply for a transfer.