You Don't Want This Smoke: A Review of Cavin Bryce Gonzalez's I COULD BE YOUR NEIGHBOR, ISN'T THAT HORRIFYING – Derek Maine

Today I’m going to smoke two chickens & read Cavin Bryce Gonzalez’s book, I COULD BE YOUR NEIGHBOR, ISN’T THAT HORRIFYING (Back Patio Press, 2020). 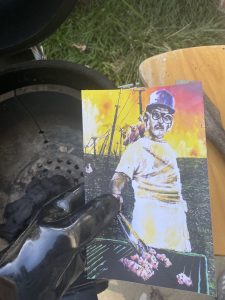 The book is a collection of short fiction and poetry according to the back cover. The back cover lies. This is a novel. It is a novel written by a character who also seems to have the burden of being a real person. This pain of being real, and not always knowing how to be, PLUS THE FACT THAT ALL OF THIS IS SO FUCKING SHORT IT MAY AS WELL BE OVER BY THE NEXT OUT BREATH, is a big part of what the novel explores, expertly.

It does not take an expert to smoke some chickens. Television, websites, YouTube: they want you to believe it’s tricky. It’s not. Light some coals until it gets to 275 degrees Fahrenheit. That’s about two handfuls of coals. If it gets too hot open the grill up and wait for it to cool down before putting the birds on. If it isn’t hot enough put some more coals on and wait. Rub the chickens with some spices before you put them on. Remember you want salt (always), sweet (brown sugar is best), spice (cayenne), smoke (smoked paprika), sour (mustard powder), & something for the ladies (garlic & onion powder). 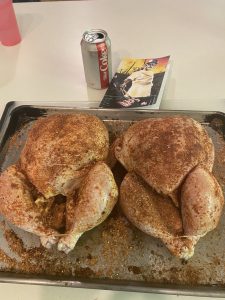 I COULD BE YOUR NEIGHBOR, the novel, is broken up into 60 sections or chapters. They are not numbered, but titled so you could pull these out individually as pieces of short fiction or poems and, on their own, they are raw Orlando parking lot across a divided highway sun beating down begging the cashier for the key to the outside bathroom so you can vomit up last night beautiful, beating, bleating poetry but, taken together, they are something even more. Something like Notes from Underground for the SoundCloud rap era. It is literature. It is our character hoarsely gasping into the rotting void: literature is not impossible. Literature belongs in line at the gas station eating your taquitos. Cory B. has this thing for literature that fits in your back pocket and he likes to skate around with it there and I’ve never met Cory B. but what I wouldn’t give to fly to California right-fucking-now and get a hug from him. I have to be honest about these things. In the section “7-Eleven” the character wonders if he’s melting.

Once you get the temperature right you put the chickens on the grill, toss some wood chips on the hot coals, and close the lid. Then you yell up at your kids and tell them it’s ‘tablet time,’ and go take yourself a nice, long shit. You’ve earned it. Let the smoke do the work. 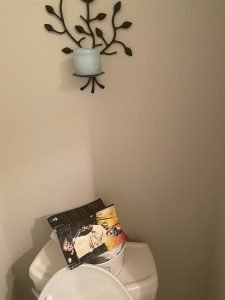 My copy is already stained with chicken rub and I spilled a little diet coke on the back cover. I’m only halfway in. I see myself, at times, in the character. There’s a great blurb on the back cover from Hannah Gordon about this: “…You’ll recognize yourself in it but you may not like the reflection.” I get that. But I also like being close to this character. I’m reminded of my own loneliness, struggles with addiction, fear of death but the character has this very calming way of almost tugging on your consciousness, at least for a few hours while you smoke some chickens, and saying, “hey, come on. Come on in here with me in my head. There’s room. Let’s keep each other company.” and you do, and he does. For this reason I won’t be discussing the back-to-back-to-back sections “A Review of the Moon,” “Noises,” and “Keep a Biome in the Cabinet” because they mean a great deal to me and they belong to me, and the character, and the author, in a kind of holy trinity that I want to protect. That’s the snow globe I’ve built and that’s how it has to be.

Most people don’t have time to smoke a chicken. Everyone wanting to tell you it’s hard is really telling you, “you don’t have time.” There’s a great section in I COULD BE YOUR NEIGHBOR, “The Acid Hit at Circle K,” with the line:

“Maybe that’s why I’m unhappy, everyone is unhappy. Moving too fast”

and I think there’s a lot of truth to that, at least when it comes to smoking chickens. The best part of that section has to do with the unnatural brightness in the gas station and I stopped and closed the book for a second. I remembered some of my worst panic attacks. I’m walking up and down the halls of an unnaturally bright elementary school & I’m very young. I’m standing in line at an unnaturally bright Panera Bread & I’m quite a bit older but the bright has tracked me down through time and space. I like it inside Cavin Bryce Gonzalez’s head because he doesn’t keep the place too bright. So, you just have to throw a handful of wood chunks on every thirty minutes for the first two hours (after that it won’t penetrate the meat) and otherwise don’t fuck with it and find something else to pass the time. 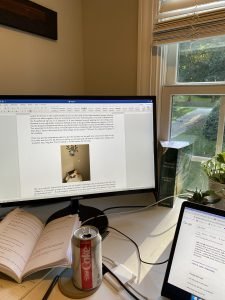 Thirty minutes before it’s done, so let’s say two hours in, you can baste the bird with some sauce. Then you’ll want to check that the breasts reach 160-165 F and the thighs 170-175 F. 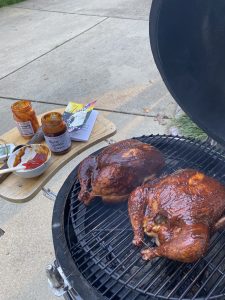 I said, “Character, I wish I had your book when I was lying in Katie A’s bathtub covered in my own blood and vomit, crying into the phone to the nurse on duty at the urgent care just swearing that someone stole my benzos” because literature like this is medicinal. It should be prescribed.

I had a really nice day with you, in the early Fall, smoking chickens in the driveway and feeling less alone. 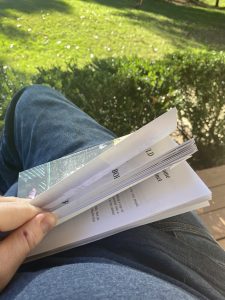